Time  to get the summer started again in the far North. Not my cabin but a friend of mines cabin that is a good escape and a very good place to just relax and do whatever you want. (within reason of course) Lots of fishing, viewing wildlife or just relaxing.

On the road to Atlin, British Columbia, we seen a total of 6 bears along the side of the road. The first was a black bear sow with 2 cubs. Then a single black bear but the next one was a Grizzly  or brown bear that was very interesting. He was sitting

on a big flat rock in the sun. It must have been comfortable to him to warm his bottom,  sitting on that rock as if it was a regular chair. The last one was another single black bear eating new grass shoots along the ditch. None ran off and we were able to take all the pictures we wanted. No other vehicles on the road so we could take picture after picture, and we did.

After we had settled in and went fishing we seen another black bear and a Mule deer (doe) that was acting strange. She jumped across the road in front of us and stood in the trees just looking. We took some pictures and backed up a bit as she looked like she wanted to go back to the other side but we were there so she stayed put just walking a few steps one way then the other like she was nervous about something. We decided  she had a fawn on the other side of the road that she didn’t want to leave. We looked for her (the fawn) but never did see her and after we drove on Dick said he could see her in the rear view mirror back on the road walking to the other side. On to fishing. 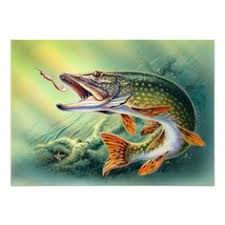 Palmer Lake is a small freshwater lake that is full of Northern Pike and a fewer bunch of Whitefish. It works out great, the Pike eat the Whitefish, we eat the Pike. I’m all for that arrangement. Fishing was very good that day. Using spinning gear and various lures, we caught our limit of 5 Pike in no time. It seemed like any color lure was doing the job, I started with a green on green and Dick was using a white and blue lure. We both were catching them but only in the 2 to 3 pound class. Anything smaller went back. As we got close to our limit, I put on a larger lure in yellow and green. Bam, first cast I tagged a fighter. As I was playing him, he broke water and jumped couple feet out of the water. This one I didn’t want to loose, and I didn’t. He was in the 7 to 8 pound range and the largest one for the day. In cleaning him we found he had eaten a 6 to 7 inch Whitefish. With that nice bunch of Pike we headed back to the cabin and the end of a fishing day.

The picture on my website shows me holding up a nice catch of Lake Trout we caught on Atlin Lake when we came up to the cabin another year, but that was what we were after this trip too. Atlin Lake is a good size lake, around 90 miles in length and the weather was not all that great for a 20 foot long boat.

That day the wind was not blowing and no rain so we thought we’d give the big lake a try. Dick’s depth sounder was not working so we couldn’t pick up the shoals, but my pal thought he knew the lake well enough to know where they were. He was partially right but couldn’t find the edge of the shoal as that is where the trout are laying, right along the edge. We caught a lot of smaller ones that we threw back as 2 per person is the limit. We ended up keeping a couple of the small ones as they swallowed the hook and we tore their gill rakers removing the hook so they would have died had we put them back. No luck with the big ones that day, but we did keep our limit. All good eating even if they are not record breakers.

When the wind is blowing to hard to fish the big lake,

we head for the smaller lakes or streams. We thought fishing Como Lake for Rainbows would be the order of the day. We grab our flyrods and head for the water. The lake is spring fed and clear as a bell. We can see rainbows swimming and “ringing”, that’s when the fish come to the top to feed and make a little ring when they break water. So we’re thinking we’ll get our limit in no time flat and skidattal. Never happened!! We fished a good hour and not a bite. Must not have liked the flies we were fishing with, or something. That was our only trip to Lake Como and the only time we got skunked fishing this trip.

With a limit of 3 Grayling for each fisher, it didn’t take long to get our limit so we became kinda selective on the size, throwing back the smallest to give them a chance to grow up. We elected to fish where the lake necked down to start the river and the water is running pretty fast. I felt cheated in that our fishing for the day was over in half an hour. Had our limit and big enough to satisfy our appetite. We can always come back another day, and we did another 2 times. Same results. Today for lunch we will fry some up for our old foggie buddies and give them a taste of goodness.

Last trip to BC this year for me

I’m glad I got this trip out of the way early and will be looking forward to another trip next year.  Dick has family coming in from Toronto CA and Portland OR for July and August and then shuts down the cabin in September for another year.

Now I can concentrate on fishing here in Alaska so no let up on the fishing end of it. Fishing is far from over for this year, and I’m happy about that.

Any time is fishing time